There’s a long history of companies adding things to coffee in a bid to make their product stand out from the rest. Type in “coffee with added…” to a search engine, and you’ll find all kinds of surprising extras.

There’s coffee with fats like butter or coconut oil. Then there are flavor enhancers like vanilla extract, cinnamon or cocoa. You’ll even find people recommending adding salt (look it up – honestly, it’s real!).

So perhaps it was only a matter of time before someone decided to add vitamins to their morning cup of Joe. And here is our Vitacup review for you. 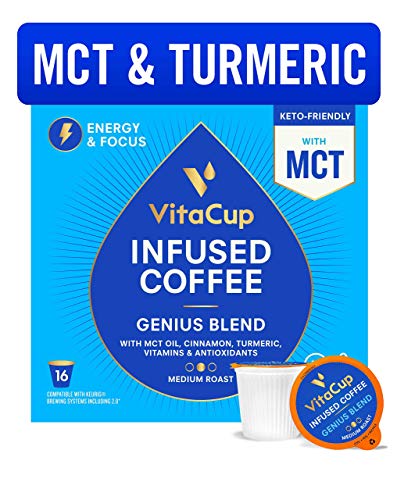 Vitacup was launched in 2017 and the idea behind it is simple. Lots of people, claims the press release, have some kind of vitamin deficiency, and lots of them drink coffee regularly. Put those two things together, and there’s an obvious health benefit in infusing coffee with vitamins.

Company founder, San Diego-based Brandon Fishman, has his own health-related story to tell. He’d found himself lacking in energy, unable to complete a “normal workout”. Added to that, he had frequent colds and suffered hangovers after just one or two alcoholic drinks.

Fishman sought medical advice, and blood tests showed he was deficient in vitamins B6 and B12. He took supplements and the problems disappeared. It was this experience, he says, that inspired him to create Vitacup (1). 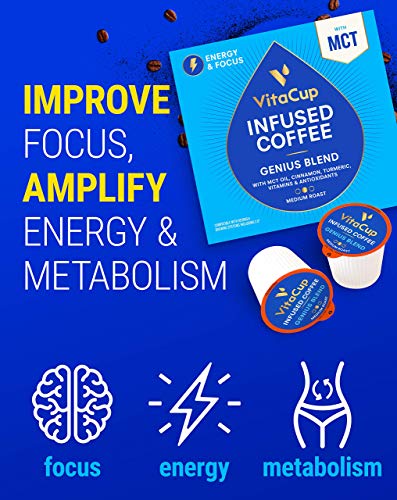 So what exactly is it?

Vitacup launched three products: a French roast and French vanilla coffee and a green tea. The company has since expanded its offering, with a decaf coffee and three other coffee blends.

All take the form of pods. They’re compatible with a range of Keurig as well as Mr. Coffee, iCoffee and Hamilton Beach single cup machines.

And then there are the added vitamins. There are six different types added to the drinks. Five of them are B vitamins – B1, B5, B6, B9, and B12. Then there’s vitamin D6 and antioxidants.

Some of the products have other extras. The green tea has added matcha and moringa, while the Genius blend has medium-chain triglyceride, turmeric, and cinnamon.

Vitacup isn’t a cheap product. You can expect to pay about the same price for 16 pods as for 40 standard K-cups. So are all those extra vitamins worth it?

Well, there are certainly plenty of customers who say they are. But let’s take a closer look at those claims. 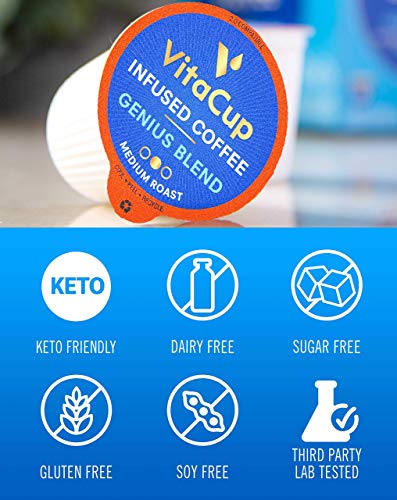 Do you need extra vitamins at all?

There’s a multimillion dollar vitamin supplements industry out there that wants you to believe the answer to this is “yes”. The truth, however, is not that simple.

For most people, a balanced diet will give them all the vitamins they need. And if you do have a deficiency, the best way to address it is by targeting foods rich in the right vitamins. Those are very often particular vegetables or fruit, and will give you other health benefits at the same time (2).

Some vitamins, though, are a bit more tricky.

Vitamin D is one of them. It’s harder to get through food than other kinds of vitamins. Your body produces it when you’re exposed to sunshine, and as long as you get enough sun you’ll be fine.

But if you’re in an area that’s not very sunny or you’re unable to get outside often, supplements will help. It can also be more difficult for people with darker skin to get enough vitamin D.

In the UK, the National Health Service recommends that everyone takes a vitamin D supplement between October and May, when there’s less sunshine around (3).

Vitamin D3, the one that’s in Vitacup, is the same form of vitamin D your body makes from sunlight. As such, it’s the one nutritionists recommend, and gives Vitacup a boost over other supplements that use D2 (4).

Another of the Vitacup vitamins, B9 – also known as folic acid – is recommended as a supplement for pregnant women.

It can help prevent conditions such as spina bifida in babies. The NHS recommends supplements for women trying to get pregnant, and up to the twelfth week of pregnancy.

So the answer to whether vitamin supplements are beneficial is “sometimes, for some groups.” 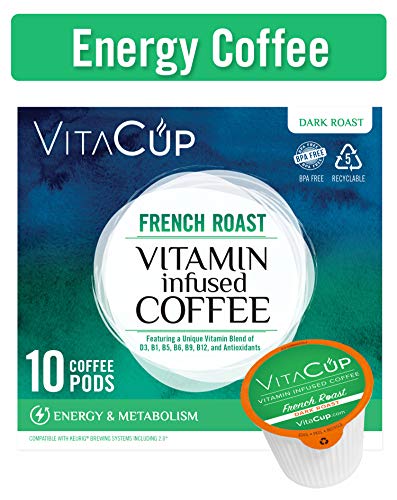 What about the vitamins in Vitacup?

We’ve seen that there’s sometimes a case for supplementing even a balanced diet with extra Vitamin D and B9. Vitacup has both of those vitamins and more. And couldn’t your daily cup of coffee be part of that “balanced diet” in any case?

To answer that question we need to look at another issue: how much of those vitamins should you be consuming?

The labels on Vitacup products list the quantities of each vitamin in each cup, as required by regulations. That makes it easy to compare those amounts to the “daily value”. This is a guide to the recommended amount to be consumed each day (5).

A quick look at the label reveals some big differences between the vitamins in a single cup of Vitacup. In some cases, one cup contains far more vitamins that the daily value, and in one case it’s less.

We’ve already talked about vitamin B9, or folic acid. Vitacup has the lowest proportion of the daily value here at 25%. And it’s important to remember that the daily value, in this case, is a general one. Women hoping to get pregnant should be aiming for up to twice that amount of folic acid.

So Vitacup won’t be a good folic acid supplement for pregnant women or those trying for a baby. They’d have to drink up to eight cups of coffee to hit their daily value. Even with decaf, that means drinking a lot of caffeine – with its less positive effects – alongside the vitamins!

At the other end of the spectrum, a single cup of Vitacup offers forty times the amount of vitamin B12 as the daily value. Is that good or bad?

In the case of vitamin B12, it’s neither. It isn’t considered toxic, so there’s no upper limit on the amount you can take. But taking this much isn’t going to be giving you any benefits either.

That’s because your body can only absorb a small amount of the vitamin, about 10 micrograms a day. Any more than that is simply flushed out of your system (6).

If you’re already getting the amount of B12 you need from your daily diet, the extra in Vitacup will be – quite literally – going down the pan. If you’re a vegan, though, Vitacup might help. Meat, fish and dairy products are particularly good sources of this vitamin.

There’s 300% of the daily value of vitamin B1, also known as thiamin, in one cup of Vitacup. Thiamin is water-soluble, so take too much and it will be flushed out in your urine. Even so, some side effects of overconsumption have been reported, including an upset stomach and skin irritation.

Interestingly, coffee can actually reduce the amount of thiamin in the body (7). What the Vitacup label doesn’t tell you is how the thiamin will interact with the coffee it’s been added to.

For vitamin B5, one cup of Vitacup will give you exactly the daily value of 10 milligrams.  Like thiamin, it’s water soluble, so more than that should simply pass into your urine. 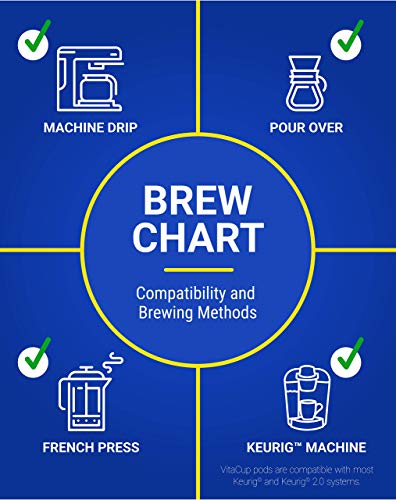 Nevertheless, doses of only 10 to 20 milligrams per day have reportedly given rise to side effects in some people. These include gastric problems like diarrhea and nausea.

The evidence here is sketchy, so don’t be alarmed. But if you’re taking vitamin B5 supplements – whether in Vitacup or any other product – try cutting them out if you find yourself with an upset stomach.

Now we come to vitamin B6, where each cup of Vitacup will give you 5 milligrams. That’s 250% of the daily value. And this is one vitamin where overdoing things can lead to more serious problems.

High doses of vitamin B6 can cause a condition called peripheral neuropathy. This is where you lose feeling in your arms and legs. The UK Department of Health suggests that this is linked to doses of 200mg a day taken over a long time.

You’d have to drink a lot of Vitacup to get to these kinds of levels! Even so, it’s recommended not to consume more than 10mg of vitamin B6 a day. That’s just two cups of Vitacup – assuming there’s no other vitamin B6 in your diet.

So what’s the verdict?

All in all, then, the vitamins in Vitacup are a mixed bag.

The vitamin D will be helpful if you’re not getting enough sunshine.

If you’re eating a balanced diet, you’ll probably be getting the B vitamins you need anyway. In most cases, any extra will simply be flushed out of your body unused. The extra vitamin B12 may help, though, if you’re a vegan.

If you’re in the first 12 weeks of pregnancy, or hoping to get pregnant, Vitacup isn’t a great folic acid supplement. You’ll have to drink lots of cups to get the daily recommended amount and that will mean lots of caffeine too.

And watch out for vitamin B6. Just two cups of Vitacup a day will mean your intake is into higher than recommended levels.

Oh, and those antioxidants are in tea and coffee anyway. So there’s no point in paying more for the ones in Vitacup.

Lots of people seem to love the flavors of Vitacup coffee – and that’s great. Drink it if you enjoy the taste and don’t mind paying more for it than other K-Cups.

If you’re vegan or sun-deprived, the vitamin D and B12 may be beneficial. But don’t drink too much! Even two cups of Vitacup a day starts ramping up vitamin B6 levels, and that’s been connected to nerve problems.

And don’t expect to see massive health benefits. If you experience an energy boost, it’s probably just the caffeine.