Skip to content
As an Amazon Associate we earn from qualifying purchases, that no extra cost to you.

If you appreciate great coffee, you’ll know all about the importance of evenly sized coffee grounds.

And you’ll also know the best way to get them is with a burr grinder.

Here we put two entry level grinders to the test: the Baratza Encore vs Capresso Infinity. Read on to see how they fare! 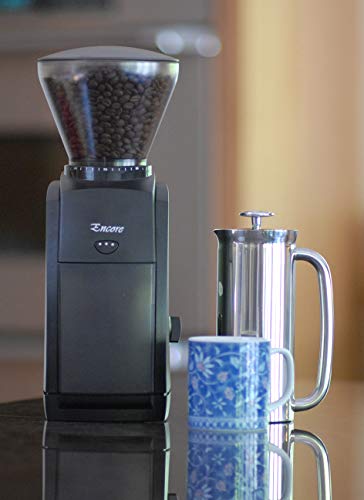 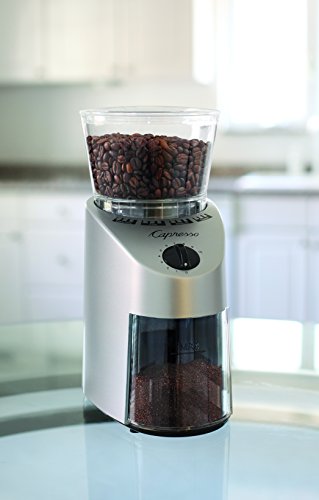 Both the Baratza Encore and the Capresso Infinity are compact little machines that won’t take up a lot of room on your countertop.

As burr grinders go, they’re not that expensive – and the money appears to have been spent on the mechanisms inside.

That means you won’t get much of a wow factor from their appearance. The casing of the Baratza is matt black plastic.

There’s a bit more choice with the Capresso, which is available in either a black or silver finish. And if you’re happy to spend a little more, there’s a better looking stainless steel version.

The bean hoppers are plastic too. In the case of the Capresso, the hopper is transparent, while that on the Baratza has a dark tint.

Some people argue that a tinted hopper is better for the coffee: light, they claim, can impair flavor. In actual fact, there’s no evidence of this. What’s more likely is that it is heat, often correlated with light, that does the damage.

But whether or not you believe that light affects flavor, contact with the air certainly will.

Neither hopper is airtight, so don’t use them as storage for your beans.

Pour in only as many as you need for your brew. That way, whether the plastic is clear or tinted won’t make a bit of difference.

The Capresso has a slightly bigger capacity – its hopper holds 8.8 ounces of beans against the Baratza’s 8 ounces. Either, though, will give you more than enough for domestic use.

8 ounces will be sufficient for several pots of coffee. And remember: you only want to grind as much as you’ll be able to use straight away. 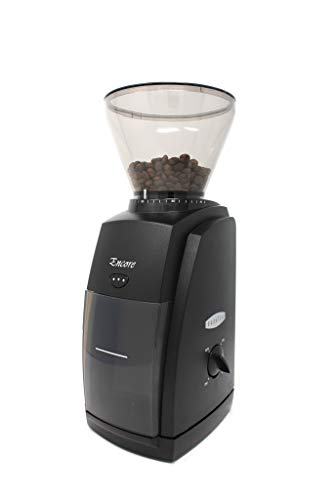 See the Baratza Encore on Amazon 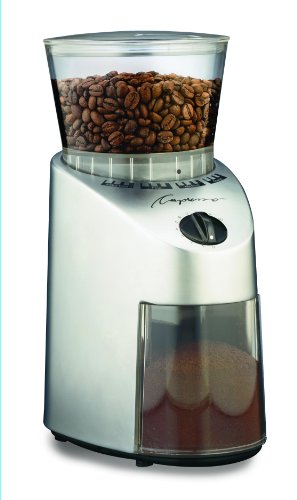 See the Capresso Infinity on Amazon

It’s all about the burrs

The main aim of any coffee grinder is a consistent grind size. That’s because even coffee grounds release their flavor at the same rate when hot water is added.

And that means you won’t have to worry about a mixture of under- and over-extracted coffee in your cup.

It’s for that reason that the burrs are the single most important aspect of these grinders (1). Both use stainless steel conical burrs.

The coffee is ground between them, producing more consistent results than a blade chopping at the beans.

You want your grinder to be able to grind at a range of different consistencies, depending on your chosen brew style.

The settings on both machines are easy to change, and you can even do it while they’re grinding.

You simply turn the hopper so that the indicator at the bottom moves along a dial indicating grind size. It’s exactly the same method for both grinders.

Where there is a difference is the number of settings available. The Capresso Infinity gives you a choice of 16 settings, whilst the Baratza Encore offers no fewer than 40.

That means with the Baratza you’ll have greater flexibility to fine tune the grind size. 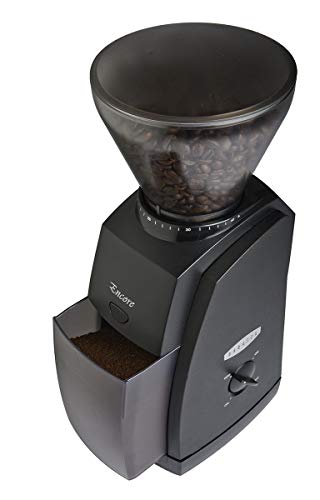 Even an entry level burr grinder doesn’t come cheap. Before you invest in one, you want to know it will give you those all-important even grounds. So how do the Baratza and Capresso measure up?

Both do pretty well, but there are limitations.

They work in the same way: as you adjust the settings, the burrs get closer together or further apart. That means that at coarser settings, the grounds are less consistent in size. And yes, that’s an issue with both the Baratza and the Capresso.

There are also some restrictions in the fineness of grind you can achieve. Both machines can struggle to produce the powdery consistency you need for Turkish coffee. If that’s your beverage of choice, you may find you’re better off investing in a specialist kit.

Both the Baratza and Capresso are, though, ideal for good quality drip or pour-over coffee. They’ll give you a pretty consistent grind at medium coarseness.

The larger spaces between the burrs at coarser settings will mean less even results. But you’ll still get a decent coffee with a French press too.

When it comes to espresso, the fine settings may not be quite fine enough unless you have a pressurized portafilter.

If you’re looking for a grinder to use primarily for espresso, you may need to spend a little more.

In short, there’s not much to choose between these two machines when it comes to the consistency of the grind. 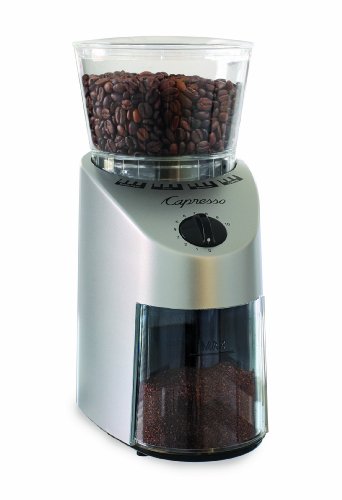 You might imagine that you want your grinder to work as fast as possible. But this is one instance where speed isn’t a virtue.

When burr grinders are rotating they generate heat – and as we’ve already seen, that can impair flavor.

With that in mind, a slower grind is usually considered better, because it limits heat generation. This is another area where there’s a difference between the two grinders.

Both the Baratza and Capresso use gear speed reducers to slow the grind. The Baratza grinds at 450 revolutions per minute.

The Capresso, though, comes in fractionally slower. It is, in fact, the slowest grinder in its class.

We’re talking about fine margins here. The reality is that the difference in the amount of heat generated is very small.

And we seriously doubt it’s going to result in any real difference to the flavor of your coffee.

Strangely, although the burrs grind more slowly, the Capresso manages to produce results faster than the Baratza. 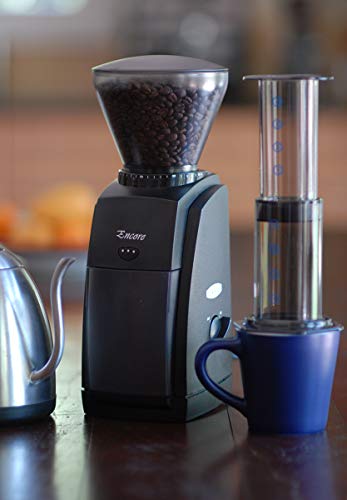 Related to the issue of speed is that of noise. Grinding coffee beans isn’t a quiet business: those metal burrs will be hitting the beans multiple times.

If you’re anything like me first thing in the morning, that kind of racket won’t appeal.

Here, the Capresso has a real advantage: it’s noticeably quieter than the Baratza. You can compare for yourself with these two great YouTube videos from Seattle Coffee Gear.

First up, here’s a review of the Baratza. You can see – and hear – it in action grinding some beans about five minutes in.

See the Baratza Encore on Amazon

Now compare it to the Capresso, grinding away about three minutes into the video.

See the Capresso Infinity on Amazon

We think it’s a whole lot quieter. If you’re going to be making coffee when you’re still half asleep, the gentler hum is a lot more appealing! 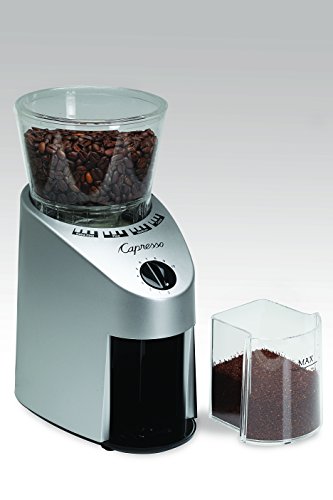 The two machines are very similar in construction. That also means you can take them apart and clean them in pretty much the same way.

Just lift off the hopper, remove the rubber collar and lift out the top burr. (Make sure you unplug the grinder first to be on the safe side.)

Use a soft brush to clean out any coffee residue. The Capresso comes with its own, but in all honesty, it’s too small to be much use. Buy a larger version and make life easier for yourself.

When it comes to the amount of residue left behind after grinding, we’ve found the Barataza comes out on top.

For some reason, the Capresso seems to generate more static. The result is that a fair amount of coffee doesn’t drop into the basket at the bottom.

That’s not just an issue for the neat freaks amongst us.

If you don’t get rid of that coffee before you grind again, it will sit there going stale.

The next time you come to use the grinder, that stale coffee will be the first into the basket. And you’ll lose the fresh coffee taste that was your reason for buying the grinder in the first place.

So if you choose the Capresso, remove the basket and tip it forward after use to remove any leftover grounds.

That way everything in the basket will be fresh next time you use it.

Anything else to think about?

The Capresso does have one feature that the Baratza doesn’t have: a timer.

This is a simple dial on the front of the machine and it will let you choose to grind from 5 to 60 seconds.

If you prefer simplicity, the Baratza’s power button will switch on in either direction. So it’s easy to use even if you’re not firing on all cylinders first thing in the morning.

We hope you’ve enjoyed our comparison of two of the best-selling burr grinders on the market. Both the Baratza Encore and the Capresso Infinity are good quality machines for the money.

You’ll get more grind settings with the Baratza Encore, which means more opportunity to fine tune your brew. But if you value peace and quiet in the mornings, go for the Capresso Infinity.

AG Ferrari is a participant in the Amazon Services LLC Associates Program. As an Amazon Associate, AG Ferrari earn from qualifying purchases by linking to Amazon.com